One of the ancient church fathers, Irenaeus, wrote, “The glory of God is a human being fully alive.” Sadly, many people are not fully alive. They are dead, or near death, or slogging through a wilderness that makes them wish they were dead. Even people of faith live this way if they are still trying to “work out” their salvation by becoming perfect in their own eyes. Mike Glenn’s book The Gospel of Yes is a must read, because it is about becoming fully alive. 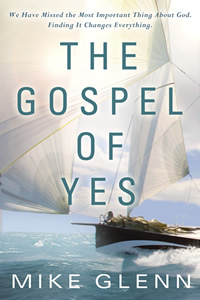 There is nothing here about becoming rich and famous, so look elsewhere if that is your goal, but if you want to be alive and feel alive, then this book is for you.Of course, this book works, because it is about the Bread of Life, another book you need to read. Mike’s book will point you to the food that nourishes real life, so it would be a good idea to have the Good Book, the Bible, handy as you are reading Mike’s book. You may want to check his premises to see if they are true.Today’s post is the first of a series that will be posted here for the next nine Wednesdays as I join five other writers in Blogging Through the Book. The Wednesday theme of Living on Tilt is “Building Strength and Endurance Through Faith Practices.” The Gospel of Yes offers a great deal of guidance and inspiration for our spiritual maturity, leading us to develop the strength and endurance of our faith. Each of the nine posts growing out of The Gospel of Yes will discuss one or more of Mike’s suggested discussion questions. If you really want to join the conversation, you might want to acquire the book. It is available on Amazon or you may have other favorite book sites. We hope you will visit some of the other blogs for various perspectives on the book, and we all welcome your comments and contributions to the conversation.

In The Gospel of Yes, Mike tells a story about a time when he felt God had let him down, and he demanded that God show up to explain himself. Have you ever felt that way – that God failed you and you jolly well want to know why?

I have never had the intestinal fortitude to do that. When I read Mike’s story, I was dumbfounded by his audacity. I have read Job’s story, and I know that Job did the same thing. Moses and Elijah both came to moments like that. Yet I have to confess that I have never thought that God let me down, because I have been very sure on any and all occasions that I was the one who let God down.

Are you like me? Do you always think you are doing it wrong? When all is said and done do you always feel as if you were not quite worthy? Or that you were completely unworthy, lower than dirt, a flop, a failure, a smudge on God’s perfect world? I have never ever felt that I could call God to account to me. When I read Mike’s story, even though I thought he had a point about what God might have called him to do and what God might have promised him, I still could not imagine saying to God, “Come on down here and explain yourself.”

Here’s the thing. Mike got into his situation because he listened to God. In fact, he didn’t do it all by himself. A lot of people at the church he served listened to God, too. They called Mike to be their pastor and Mike agreed to do the job, because all of them were listening to God’s guidance. The situation that upset Mike was actually building to a fiery explosion all the time these faithful folk were listening to God. Yet when things fell apart, everyone felt completely flummoxed, and Mike thought it was all up to him. Mike thought he was supposed to be able to fix it. He drove himself frantic, because he could not fix the problem. When he reached the end of his rope, he demanded that God come down and explain why and how this had happened. He sat down to wait for God.

Moses had a moment like this. He had been minding his own business out in the wilderness on what the Bible calls “ the back side of the desert” when God spoke to him from the burning bush. Against his better judgment, Moses obeyed God and brought the Israelites out of Egypt and led them to the “back side of the desert” around Mount Sinai. He went up on the mountain to do what God wanted him to do, and while he was there, his own brother, the one God thought could be a spokesman for Moses, led everyone to worship a golden calf. When Moses came down from his glorious meeting with God, the whole camp was engaged in a completely ungodly orgy in worship of the calf.

Moses could not imagine how God had let this thing happen. Moses doubted that God ever called him or wanted him to lead the people. Moses, like Mike, felt that he must have missed all the signs that he was on the wrong path doing the wrong work in the wrong place, and Moses wanted God to prove himself.

Elijah felt the same way. He had faced down the prophets of Baal on top of Mount Carmel and after he showed them how to call down fire to burn his sacrifice to God, he cut them down in a bloody judgment. Then at the height of this triumph, reality slapped him in the face. He knew that King Ahab and Queen Jezebel would throw the might of their empire against him in retribution for this defeat of their god. Instead of continuing to dare them to stand against God, the God who had shown his power so mightily against Baal’s priests, Elijah turned tail and ran. Facing a bunch of silly pagan priests was one thing. Facing the army of a mighty king was quite another. Elijah apparently thought that God might not defend him in that kind of a challenge, so he ran away to hide in a cave. When God asked him what he was doing there, Elijah whined about his situation. God’s response, after showing Elijah that bluster and pyrotechnics are not power, was what some translations call “the sound of sheer silence.”

This is what Mike heard. Sheer silence. For the longest time, nothing but silence. When God finally spoke, it was like a breath of fresh air.

The Gospel of Yes is a breath of fresh air, because just as Mike was ultimately called to be nothing more and nothing less than the person God had created him to be, this book makes it very clear that each of is us called to that same purpose. We don’t need to try to be who we are not. Moses did not need to try to be the arbiter of Aaron’s character flaws. Elijah did not need to fret because he could not control Jezebel. Mike needed to relax about the consequences of somebody else’s bad choices. You and I need to stop comparing ourselves to other people who are popular or rich or powerful. We need to get over our inability to fix every little thing. Instead, each of us needs to listen when God’s voice pierces the sheer silence and leads us to the perfect fulfillment of his purpose in creating us. We need to relax and let God bring us alive, fully alive.

Be watching here next Wednesday for more about The Gospel of Yes.

“Blogging Through the Book is a group of bloggers who literally blog while reading the book. It’s different than merely reading a book and posting a review. We have a chance to read and share our thoughts in community. Click HERE to learn more or visit http://www.danapittman.com/blogging-through-the-book-focus-on-yes/.“

5 thoughts on “Life, Death, or Other Options”