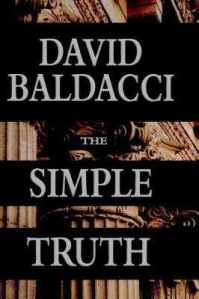 When people talk about books that provide a strong and inspiring Christian testimony, you may not expect to hear the name David Baldacci. Get ready. In The Simple Truth well-known author David Baldacci has written a book that is a good read, a real thriller and a profound Christian testimony. You won’t find it in a CBA bookstore. You have to look on the New York Times best-seller list. Surprised?

You can go to Amazon or Goodreads and obtain an assortment of opinions about this book. It is a thriller set in Washington DC. There are political characters working a political angle. It is a whodunit, but you know who done it almost from the first page. Hmmm. There is murder, madness and vengeance. Innocence. Intrigue. It is all there, and if the reviews are to be believed, there is nothing in this book that would distinguish it from any other politically-intriguing-thriller.

It isn’t Baldacci’s first effort, so Warner Books had every reason to believe that this book would go stratospheric, and that makes the reader scratch his head in wonderment that the company assigned an editor who would allow misspelled words, some true punctuation errors, and two examples of startling errors in diction to make it to final print. By comparison with many self-published, unedited books now in print, these errors are miniscule, and the author should be forgiven for believing that if such things had found their way into the manuscript, Warner Books would be sure to assign him an editor who would catch them. They don’t detract from the book, but they do detract from the reputation of Warner Books.

I am starting to feel very strange, because nobody in any of the reviews took note of the moral and spiritual makeup of the central character of the book. Rufus Harms is a convicted murderer who has spent most of his twenty-five years in jail reading the Bible his mother gave him. A Christian in jail is not a singular element in a novel, but this individual is truly memorable. Would you expect a prisoner in a hospital bed, tied down with restraints, feeling at risk for his life, to notice that a nurse caring for him had deep spiritual needs? Rufus is full of surprises, but you must wait till the very end for the most amazing expression of his nature.

The character of Rufus, and his relationship with his brother, is played against the character of John, and his relationship with his brother throughout the story. Sibling rivalry. Family loyalty. The drama of the scenes is not equal throughout the story. Some are so familiar from novels in general that you might think they were pulled from a website somewhere with boilerplate novel sections. However, the story retains its unique thrust despite some less-than stellar writing. There are sections that are truly spell-binding. The book surpasses the ordinary to such a degree that no sooner had I finished the last page than I went right back to the beginning and read it again.

One of those spell-binding episodes occurs in the last chapter of the book. It actually unfolds in the final two pages. (Don’t jump ahead, because it won’t make any sense without the rest of the story.) The climax of a novel sometimes happens shortly before the end, and then the writer takes his time wrapping up loose ends. If you experience this book as a whodunit, then maybe that is the way you will see it. If, like me, you think this book is a spiritual journey, then you will discover that the story is still developing and unfolding right through the last word.

I have been pleased to discover a few books in recent years in which the authors portray Christianity the way I experience it — a life lived in relationship with Christ. Rufus might justifiably have considered himself a victim, but when he was tempted to think and act on that perception, he rejected it as Satan’s work to steal God from him. Many people think Christianity is about learning and following a lot of rules, and many people make fun of the rules. This writer simply portrayed a Christian living his faith. Everyone who thinks Buddhism is preferable because “Buddhism is a way of life, not a religion” might need to re-examine Christianity after reading The Simple Truth by David Baldacci.