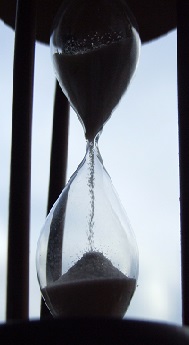 One day after lunch, Samuel called Saul aside. Everyone else was chatting amiably after a good meal, and Saul may have wondered why they should leave that pleasant conversation. He had no idea how important it could be to step off the path of the crowd and go away and get nearer to God. Samuel said, “stop here yourself for a while, that I may make known to you the word of God” (1 Samuel 9:27 ESV).

Every once in a while, God speaks to each of us with that kind of urgency. Many of us can tell stories of days when we were buzzing about doing our ordinary things when suddenly God broke in. God interrupted. He must do that now and then, because he has a hard time getting our attention.

In Saul’s case, the first thing Samuel did was to anoint Saul king of Israel. To become king is a major event. Even the anointing is an exciting moment. You might think that Samuel should have done it in a  big impressive ceremony, like a political convention where they choose their nominee for president. A crowd was handy, and they had just had a feast. They were in a good mood to be entertained or impressed. Why did Samuel drag Saul away all by himself instead of anointing him king in a way that would impress people?

God is different from us. He chose a quiet place apart from other people for Saul’s anointing, because even though Saul was the man God chose, he was not quite ready to be king.

Saul needed time to get ready to be king. Saul needed to learn that even the king must still obey God. In this time apart, Samuel gave Saul some instructions about the things he was required to do. Taking the time to do them would give Saul time to grow in his relationship with God and learn submission to God’s will. Among other things, Saul would learn to wait for God’s timing.

We all need such lessons. We think that if we know what God wants us to do, we should be able to run do it right away and be a great success and get acclaim for our accomplishments. God, however, knows that we are not ready. We need to know where we are going, but we need to learn how to get there at God’s pace in his time. We need time to mature and get ready for the work God has for us to do.

The time God designates for our preparation is not lost time. We are not “wasting” time as we study and pray, or as we take baby steps forward in service. All the time in the world is but an instant to God. When we are studying to learn skills necessary to do the job he has called us to do, we are making progress according to his purpose and his time. When we are learning to work with people and build relationships, long before we think we are finally starting to do what we were called to do, we are growing in readiness to do the big job for which he called us aside. While we learn, we also mature. Our relationship with him strengthens. Our bond with him solidifies and deepens.

When God calls us to great work, none of it happens overnight. It takes time. His own greatest work took thousands of years. Creation was still new when Adam was ejected from the Garden of Eden. The newness had worn off considerably by the time of the Roman Empire. Yet that was the time when Jesus was born, exactly the right time, and he died for our sins at just the right time. Not too early. Not too late.

Our own callings and the timing of their fulfillment may be separated by years, yet none of that intervening time is “wasted.” God uses time the way Michelangelo used the time of chiseling and chipping and polishing away every bit of extra stone until he uncovered the image of David inside a marble pillar. We all must be ready to spend the necessary time with God as we listen and mature and prepare for our full obedience to his call.

Dietrich Bonhoeffer was a brilliant student of theology and earned two doctoral degrees before he was 25 years old. It would seem that he was ready to be a great professor, yet over the next five or six years, he recognized that it was more important to live his faith than to dissect it verbally in the classroom. He began to understand that living his faith meant a confrontation with evil, powerful evil in the form of the Nazi party in Germany. His understanding did not happen overnight or in a blinding flash in a worship service. God shaped him daily by new insights that grew out of both his faithful daily meditation on the Bible and his faithful daily experience of trying to be more and more like Christ. His years of being reshaped in the crucible of Nazi Germany led to his death, and might be considered to have been “wasted,” but Bonhoeffer said, as he was about to die, “This is the end—for me the beginning of life.” He understood that God had always been shaping him for the moment of his death, which would be the moment when he, like the apostle Paul, said, “For to me to live is Christ, and to die is gain” (Philippians 1:21 ESV).

It takes time to learn how to live for Christ, yet none of that living may feel like the fulfillment of your calling. While you do the best you can to serve Christ, you may feel as if you are hardly scratching the surface of what needs to be done. You may feel that you fail miserably in every attempt to serve Christ. Yet all the time, he is shaping you. You are learning and growing, whether you are introducing hundreds to the gospel, like Billy Graham, or handing a cup of water to a single child in Myanmar. You may be unknown to crowds, but you are known to God. He knows exactly where you are in your development. Dietrich Bonhoeffer knew that his best work lay ahead of him as he felt the hangman’s noose tighten around his throat.

We all wonder when we will get to do our magnum opus. We simply need to let go of all that concern and let the creator of time manage our time and shape us as he will in his own good time. Time belongs to God, and the passage of time takes place at his direction. Time spent growing in relationship with him is not wasted; it is used with good stewardship. We can take our time in his presence, as we follow him and learn from him. Everyone needs to pause when he hears the call, “stop here yourself for a while, that you may hear the word of God.”

By Katherine Harms, author of Oceans of Love available for Kindle at Amazon.com.  Watch for Thrive! Live Christian in a Hostile World to be released November 2015.

4 thoughts on “It Takes Time”